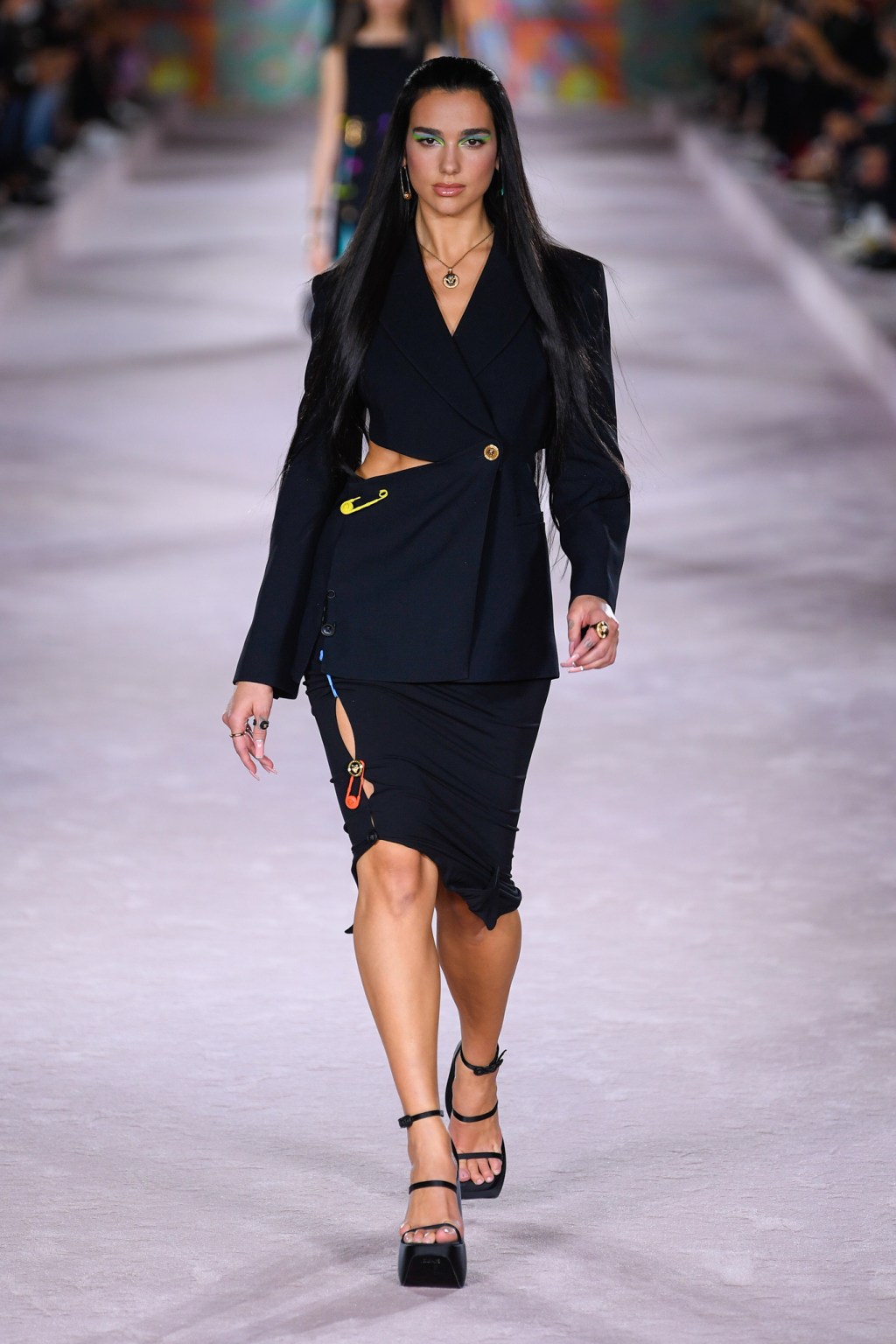 Celebrities and supermodels, prints and crystal mesh, foulards and safety pins — and a a big dose of fun. All the ingredients of the signature explosive Versace formula were there on Friday night when the fashion house returned to the physical format with a flamboyant show.

To the tune of her retro pop hit “Physical,” British music star Dua Lipa, the face of Versace’s fall 2021 advertising campaign, made her catwalk debut walking the runway twice: she opened the show in a black skirt suit with slits kept closed by multicolor safety pins and she closed it — and took the final bow with Versace — in a hot pink crystal mesh set.

She was not the only notable on the runway. Along with the most-requested models, Gigi Hadid included, the cast featured Emily Ratajkowski; Naomi Campbell, – her statuesque beauty exalted by a mannish suit in a bold pink tone – and Madonna’s daughter Lourdes Leon Ciccone, wrapped in a silver crystal mesh gown.

On the catwalk, which featured a roof created with silk foulards that were waved by shirtless perfectly abbed models rhythmically pulling black ropes, Versace unveiled a rich, big co-ed collection true to the brand’s heritage.

The brand’s iconic safety pins made a playful comeback in brightly colored variations that peppered several black dresses and separates with slits, vertical cuts and cut outs. Foulards stole the spotlight. Splashed with vibrant patterns, they were not only used as accessories but became an integral part of the pieces, for example as inserts in a denim mini frock, peeping out from the edges of a sexy vinyl bustier dress or from the waist of a pair of classic fluid pants in a deep burgundy tone paired with a matching coat and a logo T-shirt.

“The foulard is a fundamental component of Versace’s heritage and character. It’s acted as a canvas for our iconic prints and is worn in multiple ways from knotted tops to headscarves to bag accessories, it’s a way of adding Versace attitude to any look,” said  Versace chief creative officer Donatella Versace. “The foulard has been with us since the very beginning of the brand, but this season turns everything on its head, it is no longer fluid or dreamy, the scarf is provocative, sexy, wound tight.”

Vivid colors, from sorbet shades to neon hues, added an energetic boost to the show’s flamboyant vibe, underscored by maxi floral and geometric patterns, as well as logos – especially on the men’s pieces, which had a varsity, sporty vibe, or on the knit sweaters and vests enriched with an intarsia Versace crest.

There was lots going on here, but the joyous collection, which included a lineup of unapologetically sensual evening options, was a strategically studied and commercially savvy take on Versace’s iconic exuberance that  should keep its parent Capri Holdings happy.