The Ford Mustang is most certainly in the running for the coolest American-made car of all time. But even among the model’s many iterations, which Ford has been churning out for nearly six decades now, there is a strict hierarchy. Up near the very top is the Boss 429.

As luck would have it, a fearsome, fully restored 1969 example of the high-performance ‘Stang will be auctioned off by Barrett-Jackson later this week as part of its annual Las Vegas sales event. The gorgeous coupé isn’t just for display, though. It’s packed with a massive mill that can still leave other drivers in its dust at 53 years on.

To recap, Ford introduced the performance-oriented Boss 429 variant in’69. It was born out of the need to homologate the 429 semi-hemispherical engine the automaker was using in its NASCAR racers. Thanks to its track-focused engine, it was a hit with enthusiasts, but would only be in production for two years. During that time Ford built just 1,359, making it one of the rarest and most coveted Mustangs ever.

This particular Boss 429 is done up in Royal Maroon, one of the five colors the model was originally available in. Its body is more sculpted than other versions of the coupe from that year. Nowhere is this more clear than its massive color-matching hood scoop; to this day, it’s the largest to ever be featured on a Mustang. Like every other Boss 429, the entire interior is finished entirely in black, which thanks to a recent restoration looks brand new.

Just as impressive is what’s under the hood. The variant was a true muscle car thanks to a 429 cubic-inch V-8. The engine is mated to the original 4-speed manual gearbox and is capable of pumping out a hair-raising 370 hp and 450 ft lbs of torque. Even though the mill has been fully restored like the rest of the car, a special effort was made to keep all the parts that made it special in the first place, such as the KKX spindles, a rear sway bar and a trunk-mounted battery. 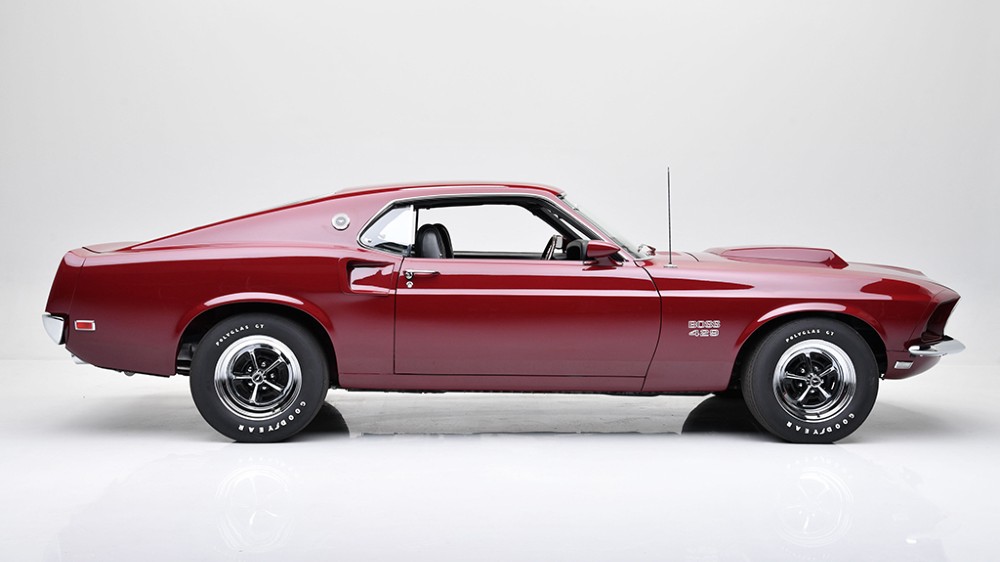 The Boss 429 is one of several Mustangs that Barrett-Jackson will be selling in Vegas. There’s also an Acapulco Blue 1968 Shelby GT500KR and a 1965 Ford Mustang custom convertible with the engine from a 2007 GT500.

“Over the years, Ford and Shelby Mustangs have enjoyed a steady track record of stability and value among collectors worldwide,” Craig Jackson, Barrett-Jackson’s chairman and CEO, said in a statement. “But the popularity among collectors is not just about the value of these vehicles, they are also incredibly fun to drive or proudly show at a Concours or during a local cars and coffee show. ”

The Stang in question is being sold without reserve. Barrett-Jackson hasn’t placed an estimate on it either. Considering the car’s condition and pedigree, though, it should hammer down for at least six figures.