McMurtry Automotive has its eye on more than just speed records.

The British startup told Autocar it’s going to build a street-legal version of its Goodwood-conquering electric fan car, the Spéirling. Some compromises will have to be made, but the plan is to build a vehicle that you’ll be able to drive from home right out onto the track without missing a beat.

One year after making its debut at the Goodwood Festival of Speed, McMurtry’s EV showed just what it’s capable of at this year’s edition of the legendary hill climb. During the Sunday Shootout, former Formula 1 driver Max Chilton was able to pilot the battery-powered speed machine around the twisting 1.16-mile course in just 39.08 seconds. That time comfortably beat the previous official and unofficial marks of 41.6 seconds (set by a McLaren MP4/13 F1 in 1999) and 39.9 seconds (by a Volkswagen ID.R in 2019).

The Spéirling, which looks like a mini-Batmobile, was designed specifically to go fast. It’s only 10.5 feet long and weighs just 2,205 pounds thanks to copious amounts of carbon fiber. It’s equipped with a dual-motor powertrain (one on each rear wheel) connected to a U-shaped 60.0-kWh battery, according to Car and Driver. McMurtry hasn’t revealed how powerful the setup is, but the magazine reports it can generate around 1,000 horses. The real difference-maker, though, is a set of two turbines located behind the bubble cockpit that suck the air from beneath the car and shoot it out the rear. The pair of fans can produce up to 4,000 pounds of downforce, keeping the car close to the ground as it rockets forward. They also produce—as can be heard in video of the record-breaking run—a whole lot of noise.

Some changes will be needed before the vehicle is ready for a grocery run, though. McMurtry told Autocar that both versions will have the same powertrain, but that its aerodynamics will have to be reduced. It will also need to be outfitted with headlights and windshield wipers, two elements that will come in handy away from the track. 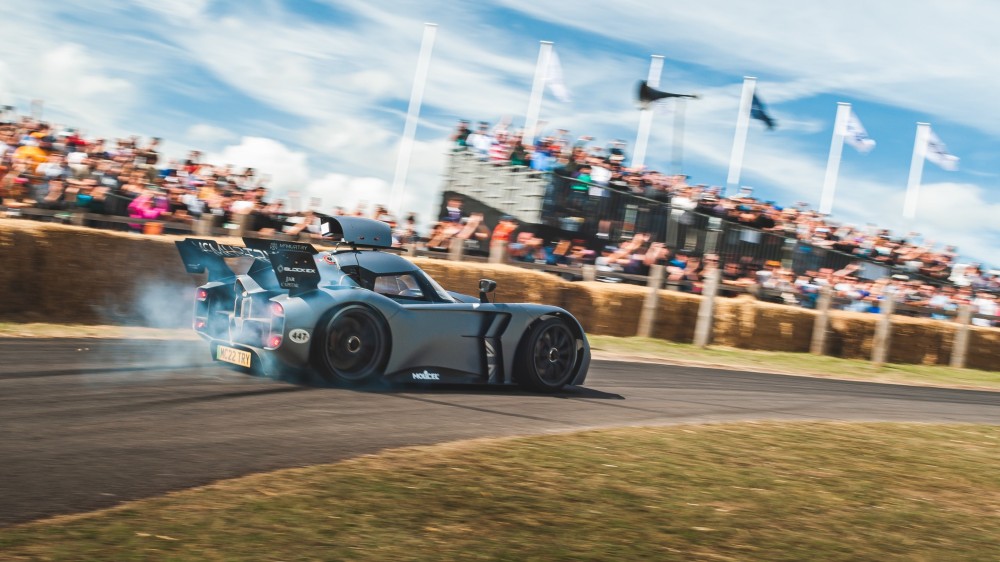 The McMurtry Automotive Spéirling at the 2022 Goodwood Festival of Speed

“It will never be the most comfortable over speed bumps, but that’s not really the point,” Thomas Yates, McMurtry’s managing director, told the publication. “The point is you have this unbelievable, loud, exciting, electric, really compact car that you know will be the fastest at any track day you attend.”

McMurtry is only in the early stages of homologation so it’s unclear right now when the Spéirling road car will arrive. The company did tell Autocar that only a handful will be built and that it will cost into the “seven figures.” If that’s not a dealbreaker, you can register your interest now through the company’s website.