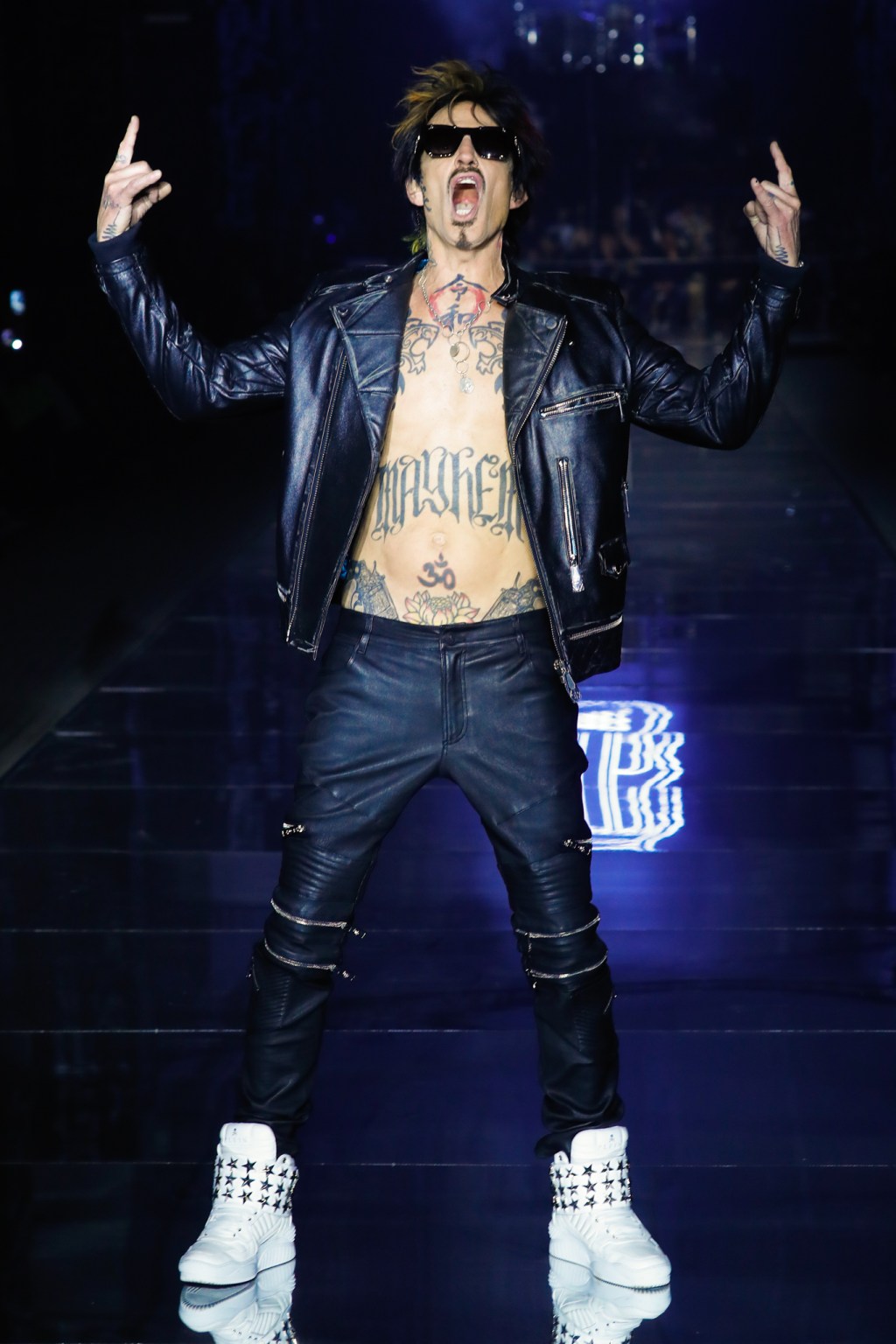 “This show is about sex, tofu and rock ‘n’ roll,” said Philipp Plein, taking the mic Friday night to mark the brand’s return to the runway for the first time since COVID-19. He was referring to the brand’s foray into vegan fashion, which he credits to partner Lucia Bartoli, who recently gave birth to their baby boy.

“I create shows for you, for the clients, for people who love the brand. This is for Milano,” he continued, rallying the crowd before introducing Tommy Lee. He took his own god-like spin down the catwalk, stopping to pose for the photographers, before stripping off his jacket and taking his place at the drums on a raised platform.

It was a moment. Particularly because star-crossed lovers Pamela Anderson and Tommy Lee in their prime ’90s to Y2Kness, as seen in the recent hit Hulu series “Pam & Tommy,” could be mascots for this fashion season.

Earlier Saturday night, another famous face of that era, Paris Hilton, walked the runway at Versace in a bit of stunt casting. Paris Jackson walked this one, and there was a Pamela doppelganger, too, with blown out blonde hair, low cut dress and pin thin heels. She didn’t go unnoticed.

The collection delivered on Plein’s promise, but with less raunch (and fewer logos) than in some seasons past, and more of a luxury sportswear lifestyle direction. There were even hints of Tommy Hilfiger, and not just because he had another tatted drummer, Travis Barker, performing at his show. They should have a fashion drum-off.

Well, clearly, there’s no supply chain issue with crystals, because they rained down all over this runway (and others), where ripped denim cropped jackets and baggy jeans, micro-mini Y2K tweed mini skirt suits and barely there mesh dresses were hyper blinged.

Most of it looked good, and the work was impressive, especially on allover crystal embroidered floral and heart tattoo motif pants, a psychedelic rainbow patterned crystal leggings that were jewels for the bod.

For when the occasion calls for something a bit more subtle, or at least tailored, Plein offered rock ‘n’ roll suiting, a black bolero with lightening bolt crystal lapels paired with low slung pants and a crystal encrusted thong, for example. Men’s tux jackets and overcoats were also iced.

There were plenty of black leather looks for those who want to dress like vintage Tommy, when he’s dressed that is.

Everybody loved it. The models were dancing along with the rapper CJ before they even left the runway.