This year more than fifty watchmakers have created timepieces for the Only Watch charity auction, which commences Saturday, November 6, in Geneva. Christie’s will auction these incredible watches to raise funds that benefit research in the battle against Duchenne Muscular Dystrophy.

While you may have seen a few of the watches set for auction earlier this year when Only Watch announced them, we thought you’d enjoy seeing many of these inspired designed again just ahead of the event.

The watches will tour the globe starting September 22 in Monaco, and can then be seen in exhibitions in Dubai (September 30 to October 3), Tokyo (October 8 to 10), Singapore (October 15 to 20), Hong Kong (October 25 to 27), Macau (October 28) and finally back in Geneva on November 4-6. Click here for details about the Only Watch world tour.

Today, we highlight the offering from F.P. Journe. The independent watchmaker’s entry into the auction is a stunning central-dial automaton inspired by a mechanical hand created by Ambroise Paré (1509-1590), the father of modern surgery, this unusual 42mm tantalum-cased watch displays time via hand-signs. The hand will rotate to the hour marker (indicated by the pointer) and will show a specific number of fingers to indicate the hours. At 1 o’clock, for example, only one finger will appear while the others remain clenched (see below).

The automaton is powered solely by the Octa movement’s mainspring. 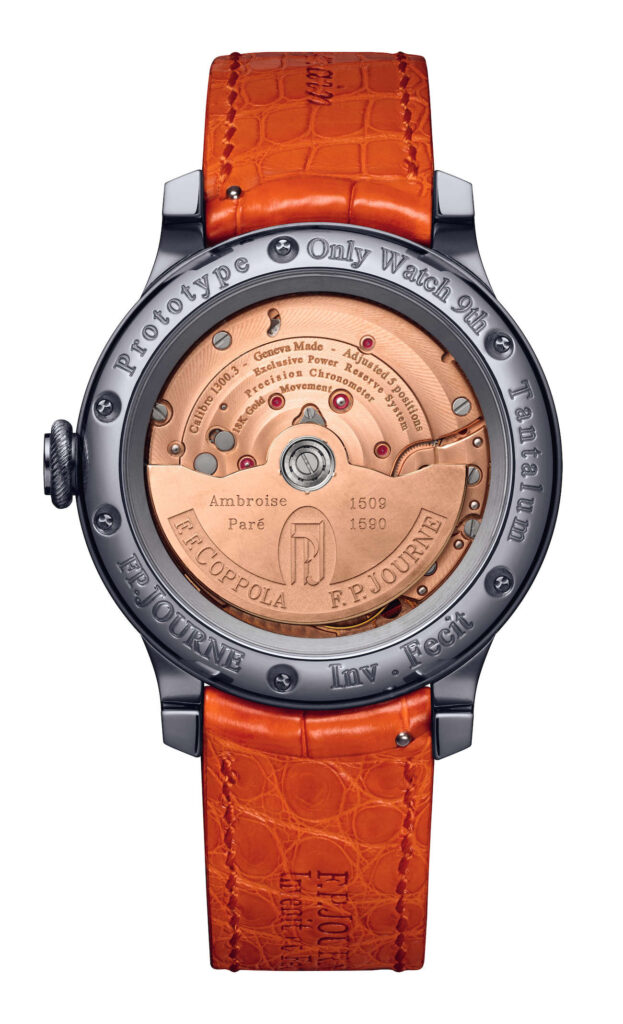 F.P. Journe devised the movement from his Octa Caliber 1300, which celebrates its 20th anniversary in 2021.

Journe explains: “This watch was born in 2012 while having dinner at Francis Ford Coppola’s house in the Napa Valley. He asked me if it could be possible to tell time with a hand in a watch. I replied that the idea was interesting and required thinking about it. But how to display 12 hours with 5 fingers? It was not an easy matter and this complex challenge inspired and motivated me. Once I figured it out, Francis immediately sent the sketches for the fingers positions. After more than 2 years, I could finally focus on “Fecit”. After 7 years of development, I am proud to present the FFC prototype”.

We expect the final sale price for this watch to exceed its auction estimate.