Think of revved engines and race cars, jetsetters and checkered flags and one place comes to mind: Monaco. It’s almost 100 years since the first Grand Prix took place there, one that’s now part of the petrolhead Triple Crown. Fast cars are a permanent fixture there, though: Garages in Monaco resemble more a Ferrari and Porsche showroom than a parking lot.

Wealth has helped Monaco stay at the forefront of high-end automobile excellence, of course, but it’s more than that. The late ruler, Prince Rainier III, was only six when that first Grand Prix took place, but cars became a lifetime obsession. He bought so many, in fact, that his private collection outgrew the garage at the palace—and so he opted to open them up to the public in 1993.

The assortment used to be housed in a soulless, cavernous space close to that palace complex in the Fontvieille district, about as inconvenient a site as possible in a 499-acre country (that’s smaller than Central Park). Thankfully, though, Rainier’s son, the present ruler Prince Albert, has just reopened his family’s collection in a brand-new site, right at the principality’s heart. 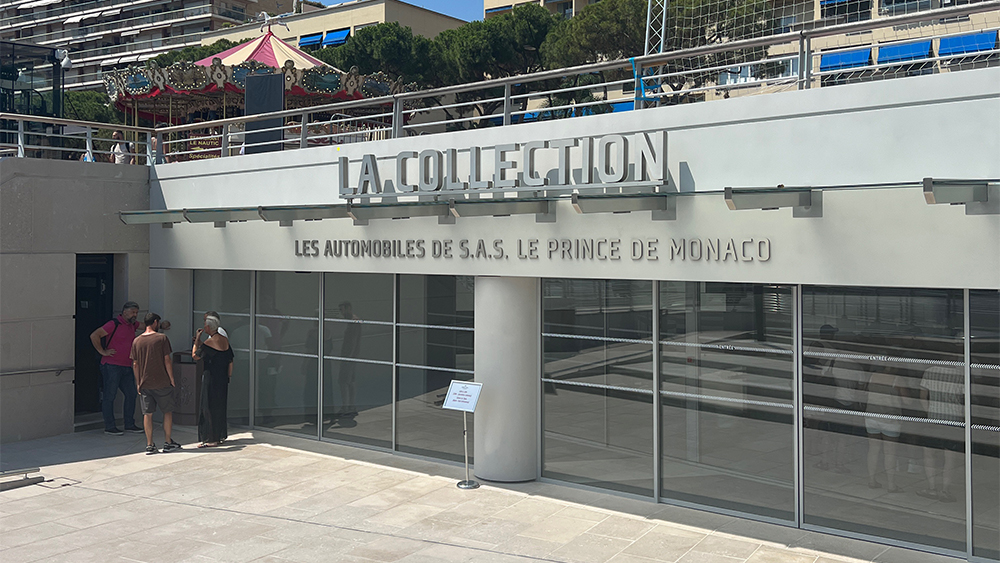 The façade of La Collection, where Prince Rainier III’s vast car collection is on display.

That new, custom-built home by architect Fabrice Notari took 10 years from start to finish. It’s a futuristic, almost 38,000-square-foot underground bunker that sits right on the Port Hercules. The new location is a nod to Monaco’s connections with F1, as it’s right by the double chicane dubbed the Piscine during the race. It’s also handily on the harbor where many superyachts berth—step off your yacht and you can now visit the collection within minutes.

In the old space, the cars were lined up, almost dutifully, more like a kid might when playing with a few miniatures. Now, the royal family’s haul has been reinstalled in a smarter, pithier way, with 75 cars (both borrowed and crown-owned) ranging over two floors with a distinct sense of direction and curation. 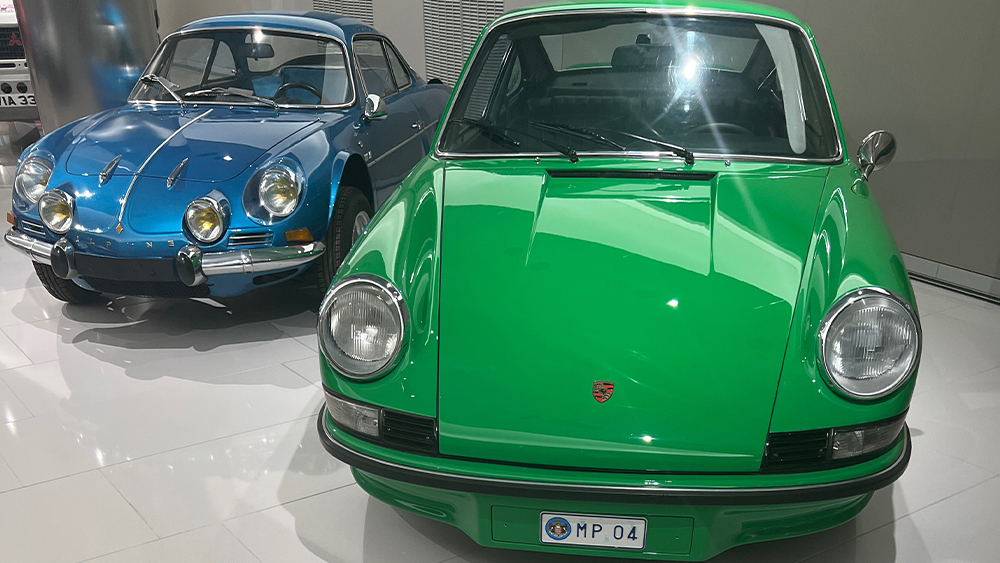 There are teasers at the entrance, like the swaggering but featherlight 1973 Porsche 911 Carrera, one of the first to integrate racing performance into a road car. The visit truly starts, though, as you’re guided downstairs to the lower mezzanine. The display here focuses on the collection that Rainier himself assembled; there’s a regular vroom-vroom piped through the speakers to amp up the atmosphere.

The cars are clustered in various groupings: Take the museum’s own Concours d’Elegance, where they line up for inspection, show pony-style with a 1920s-era Rolls-Royce like a 40/50 HP Silver Ghost Limousine Barker, sturdy and elegant, or the eight-cylinder Delage Berlin from 1934. Look, too, for the case of glass vials, a rainbow of colors. “This is what they used to put real flowers in to scent the car,” Valerie Closier, the museum director and the daughter of an amateur rally driver, told Robb Report on a recent tour, “Now, we just have the pine trees.” 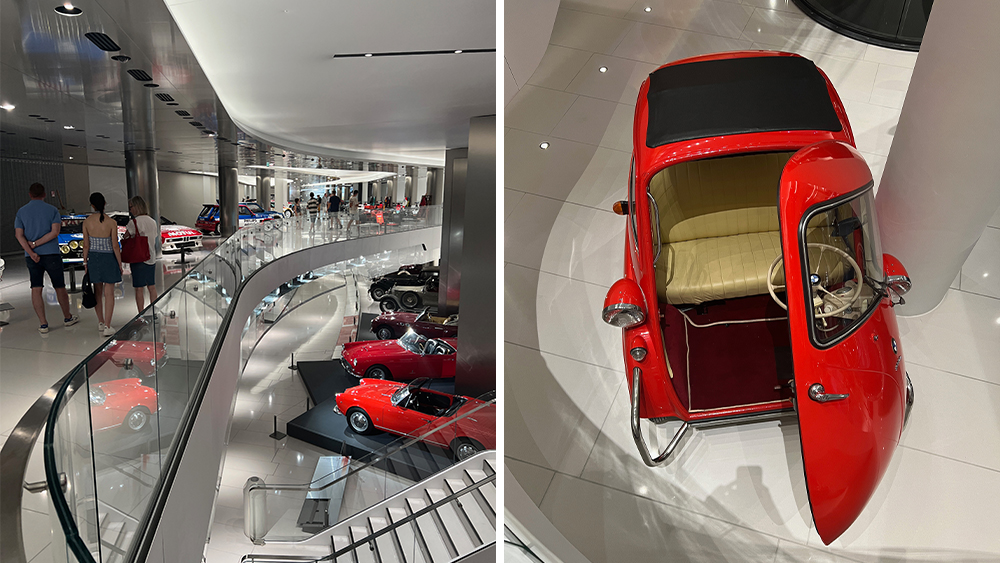 Another section here is dubbed “The Beautiful Italians”—though it’s confusingly ranged against screens showing black and white movies featuring Elvis among others, while speakers blare 1950s pop. Most of these cars are gleaming, and lipstick-red, with the racy insouciance that’s so typical of Italian design. Take the Isetta—best known as the bubble car (pictured above)—that’s jauntily installed by the staircase, its front invitingly wide open; sadly, there’s no way to reach its butter-leather taupe seats. Tucked in one corner nearby is a 1950s race car legend: One of only seven Renault 1603s adapted for racing, it’s the sole one to have championed at the Le Mans 24 Hour race, in 1951. 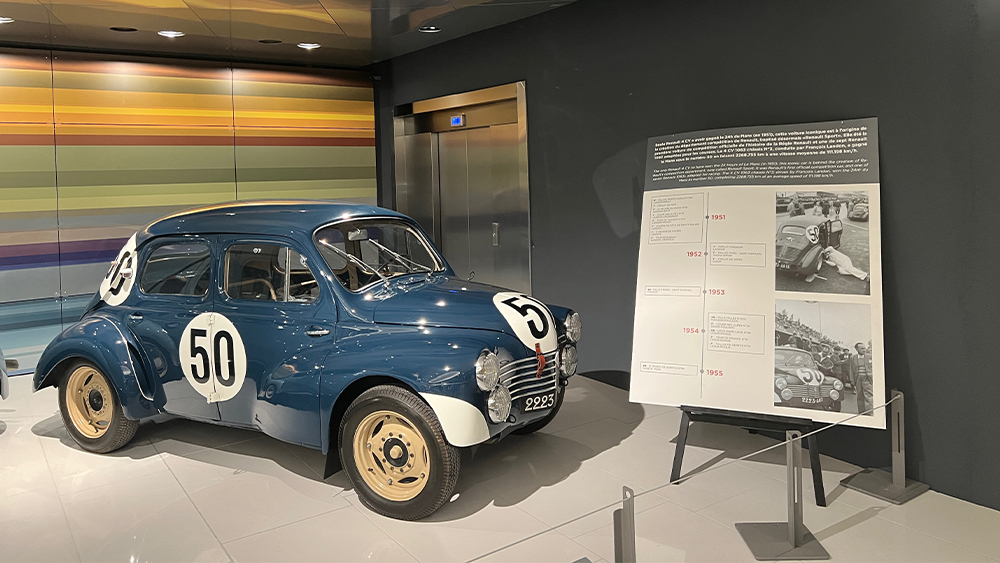 Prince Albert, the principality’s current ruler, offloaded almost 40 of his father’s favorites at auction a decade ago, from a 1956 Bentley S1 to a Berliet C2 from 1907. But his sale wasn’t a sign of waning interest; the current ruler is as much of a petrolhead as Grimaldi père. The upper level of the museum is dedicated to the race cars that Albert favors, among them Nigel Mansell’s Ferrari, which won him two F1 races. If you’re wondering what the latest addition is, just follow the selfie trail: There will usually be someone squatting down in front of the Ferrari driven by Charles Leclerc, which he loaned to the museum. And no wonder he picked this collection above all others—the 24-year old isn’t just a champion driver but one of the fewer than 40,000 people in the world who are Monaco born and bred.

Check out more photos of the prince’s car collection below: 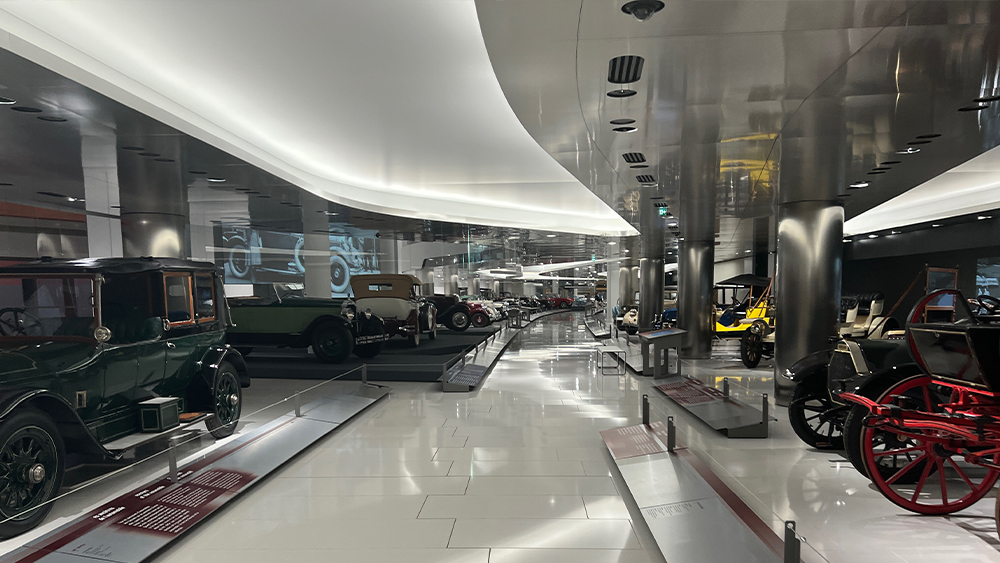 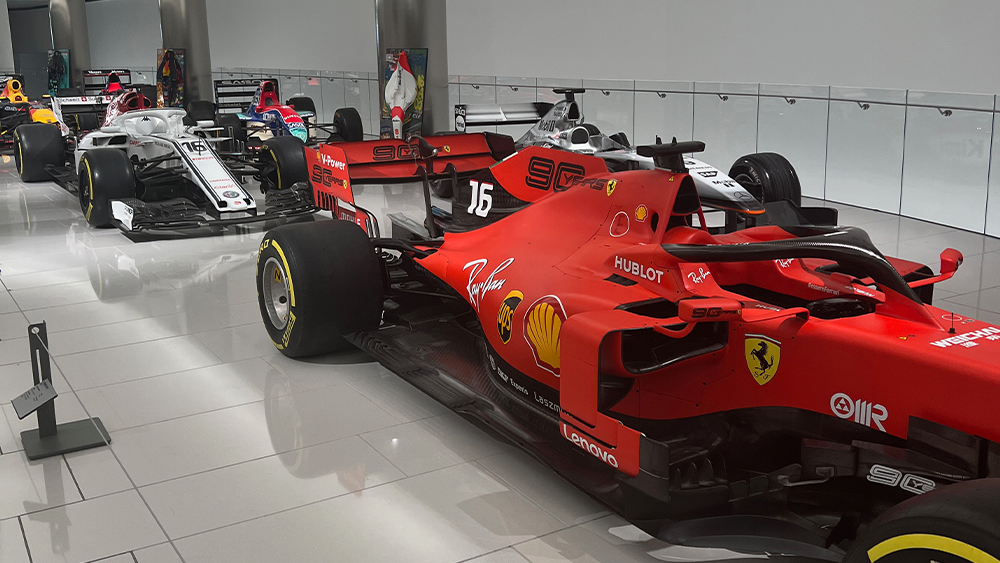 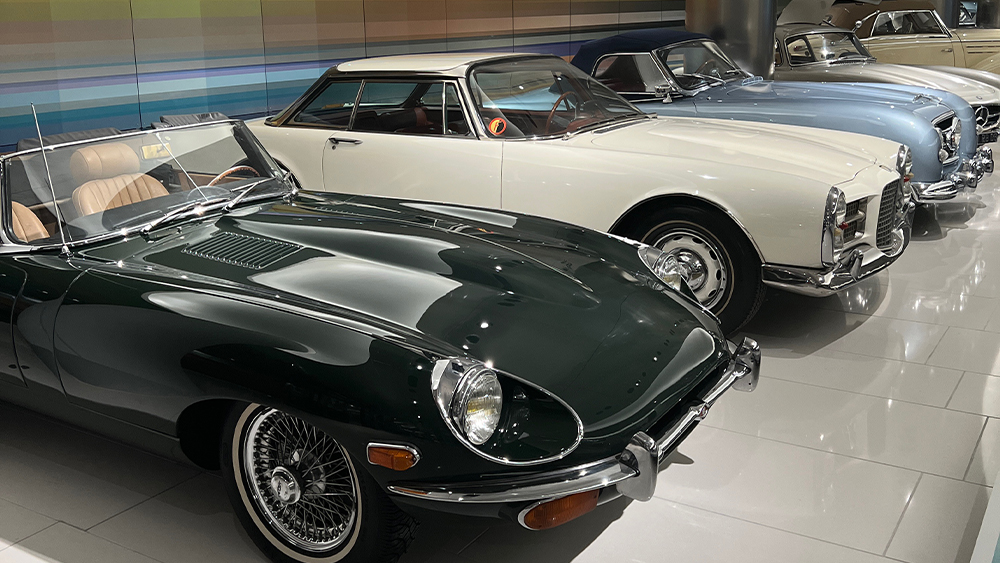 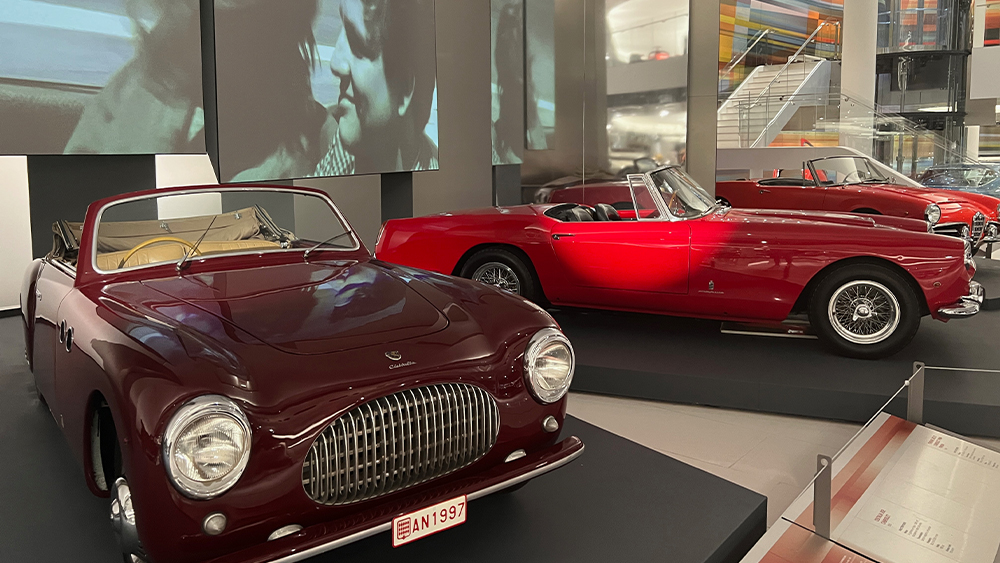 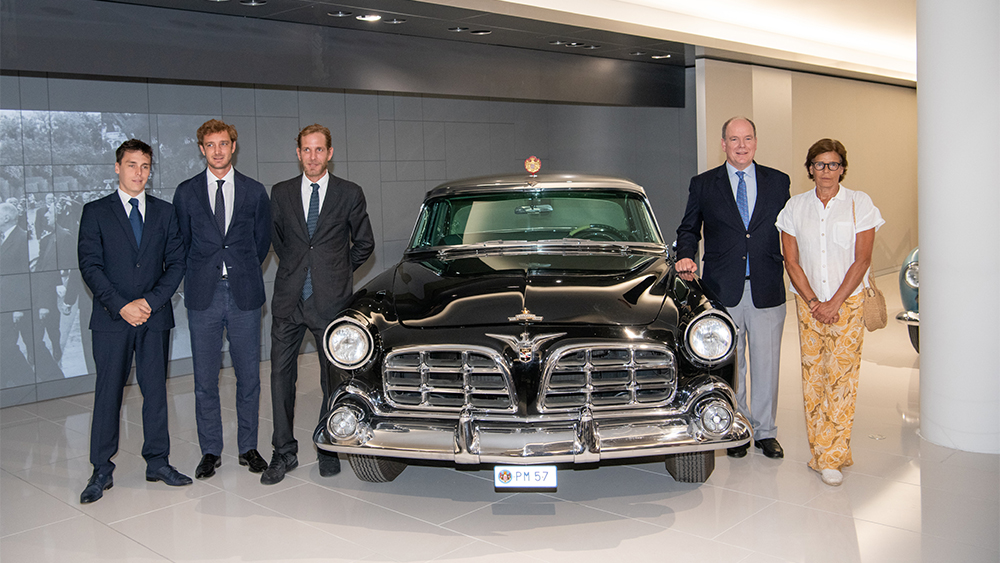