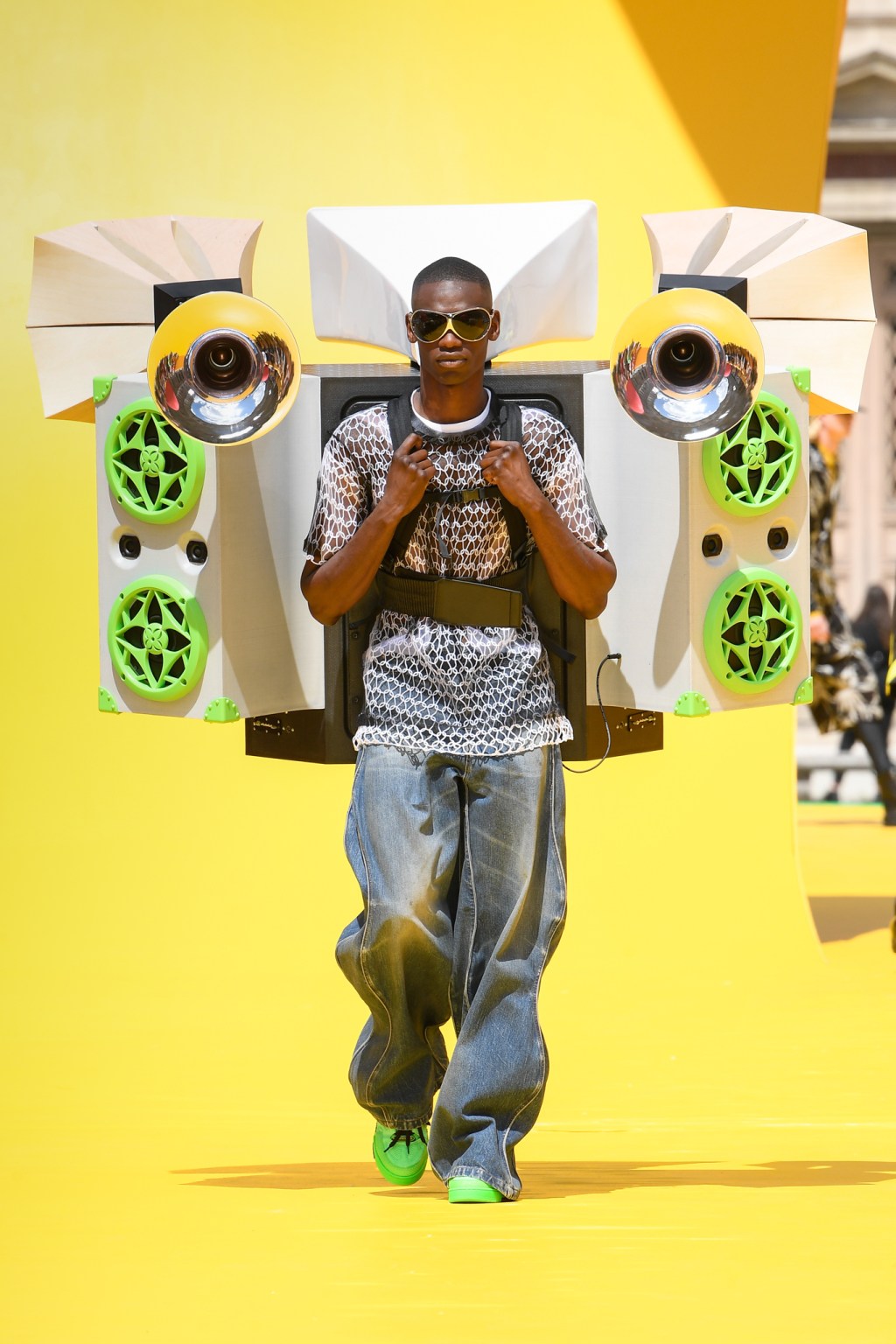 The Louis Vuitton menswear division is having a transitional season, after last January’s moving tribute to its late designer, Virgil Abloh, and in the absence of a successor. But if anyone thought the brand would scale back its display for this collection, designed by its in-house team, they were sorely mistaken.

The French luxury house built a giant yellow loop of a runway, like a theme park version of a toy racetrack, in the courtyard of the Louvre Museum, and opened the star-studded show with a high-energy performance by the Florida A&M University marching band, followed by a live set by rapper Kendrick Lamar, who performed from his seat wearing a sparkling crown of thorns.

After all, the show was followed not just by local guests, who fanned themselves furiously against the broiling heat, but a huge global online audience who view fashion as entertainment — a concept that Abloh summed up when he told WWD in 2020: “I look at my studio as a mix between Disney and an art-making studio.”

These clothes were designed to pop on the screen, from outsize suits and coats with flower-shaped buttons, to racing leathers in psychedelic wavy panels; a suit covered in origami paper planes; and two backpacks sprouting giant 3D-printed loudspeakers.

The outfits touched on many of the foundations of Abloh’s four-year tenure, which ended with his abrupt death from cancer last November. His fascination for boyhood was a central theme, with jackets featuring oversized shearling pockets in playdough colors, and coats that dangled charms shaped like sandbox tools.

Abloh’s love of flowers was reflected in the thistle patterns on jacquard coats and suits, and the lavish flower field motif embroidered on the closing look, a green suit overlaid with a trailing split skirt that echoed the poppy field prints of his debut collection in 2018, inspired by “The Wizard of Oz.”

There were nods also to his formative years as a skater in the ‘90s, and his gender-fluid approach to menswear. An acid-wash denim jacket and shorts were paired with chunky purple LV Trainer snow boots, while an orange varsity jacket covered in hand-crocheted patches was worn over tie-dye pants.

Abloh’s playful touch was evident in the accessories, including a Keepall covered in cartoon characters, and object-shaped bags including sandwich box bags with graphics that read “Freshly Baked.”

The show came amid mounting reports that British designer Martine Rose is a contender to succeed Abloh, after chairman and chief executive officer Michael Burke was spotted at her recent show in London, held at former gay spa Chariots. Speaking exclusively to WWD, Burke declined to comment on the rumors.

“I’ve known Martine for some time. She invited me to go to her show. It was on a Sunday afternoon, great weather, interesting venue. It was a nice walk in the park,” he said. “She’s been on the radar for some time, she’s had some critical successes. She’s a good representation of the creativity in London.”

Burke would not say whether a new designer will be named before the next round of men’s shows in January 2023. “We will make an announcement when we’re ready,” he said. “There’s no time pressure.”

For the finale of the show, models walked out holding a rainbow flag in memory of Abloh’s first show for the brand, as Lamar intoned: “Long live Virgil,” and guests including Justin Timberlake, J Balvin and Naomi Campbell warmly cheered.

To be sure, Abloh — whose career spanned music, fashion, art and philanthropy — casts a long shadow. But having rolled out his last collection, including his much-hyped sneaker collaboration with Nike, Vuitton must surely be starting to prepare what comes next.