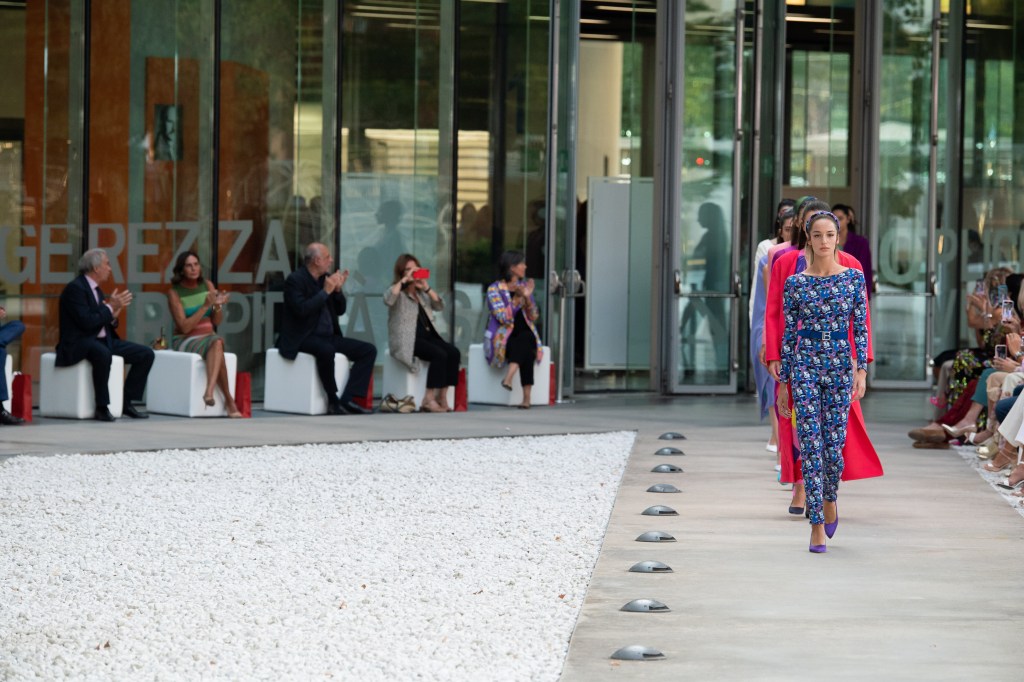 “Futurist artists suggested we look ahead and this attitude is now, in a global pandemic, more than ever a necessity,” Lavinia Biagiotti said on Monday.

For the third chapter of her Roman show trilogy and in her ongoing support of the territory, the designer unveiled her Laura Biagiotti spring 2022 collection at the MAXXI museum of the arts of the 21st century in the Italian capital.

Paraded outdoors, in a space nestled under the avant-garde shapes of the museum conceived by the late Zaha Hadid and in front of the “After Love” 2003 work by Vedovamazzei, the show followed Biagiotti’s previous events staged last September at the Piazza del Campidoglio, a symbol of the Roman Renaissance designed by Michelangelo Buonarroti on the Capitoline Hill, and at the Ara Pacis landmark in February.

The MAXXI museum was chosen to highlight the work of Futurist artist Giacomo Balla. Biagiotti is a sponsor of the Casa Balla exhibition running until November at both the museum and at the artist’s home in Rome, lending several works owned by the designer’s foundation, the biggest collector of Balla’s works in the applied and decorative arts.

The spring collection comprised vibrant prints inspired by the artist, reproducing, for example, a 1930 sketch he designed for scarves. To wit, there were also several foulards that harked back to his designs worn as bandanas by the models.

Juxtaposed to the prints, there were several color-blocked dresses in a beautiful palette of different shades of pink and fuchsia, purple, yellow and green, as well as blue and orange.

More color came from the floral patterns — a flurry of petals that added joyful touches to the formal blazers and sartorial pants, but the look was rendered better in a finely pleated, patchwork dress that looked fresh and modern compared to a full-on and single floral pattern. “Clothes reflect the moment we live in,” and now, after months of sweatshirts, the energy of the colors telegraph a return to life and “to smiling,” she mused, “investigating the connection between women and the new times, fashion and art. Dressing up is an expression of creativity.”

Biagiotti’s go-to comfort color — white — was part of the lineup, seen on the designer’s core knits, as on a braided maxi pull, or on a cashmere and silk blazer. Blazers were key in the collection, with Chinese collars and shown in a rainbow color palette, and at times with big, important shoulders.

This season, the collection had a somewhat sexier edge, with cutouts, transparencies and body-hugging dresses, or a mesh top worn over a white miniskirt, for example, but it was all done tastefully.

Futurism emphasized dynamism and speed, so it was fitting that Marcell Jacobs, the first Italian to ever win the Olympic gold medal in the men’s 100 meters, attended the show — his first. “I’ve always loved fashion. I try to bring my own style to the track when I train, combining the looks in the right way, so I’m very happy to be here today,” Jacobs said.

Biagiotti and her mother Laura have always supported athletes, and Olympic medalist and ace swimmer Federica Pellegrini also attended the show, recalling how she first walked the runway for the brand in 2004 after the Olympics in Athens that year. “I loved the contrasts and the strong colors, the set, the evening,” she said with a smile, looking around.

Eleonora Abbagnato, director of the Teatro dell’Opera, closed the show twirling a full skirt that reproduced a giant flower. An image of the sisterhood she regularly champions, the designer took her bow with the ballet dancer and the young models unveiling a few looks of her new children’s line Laura Biagiotti Love — truly looking to the future, as she put it.