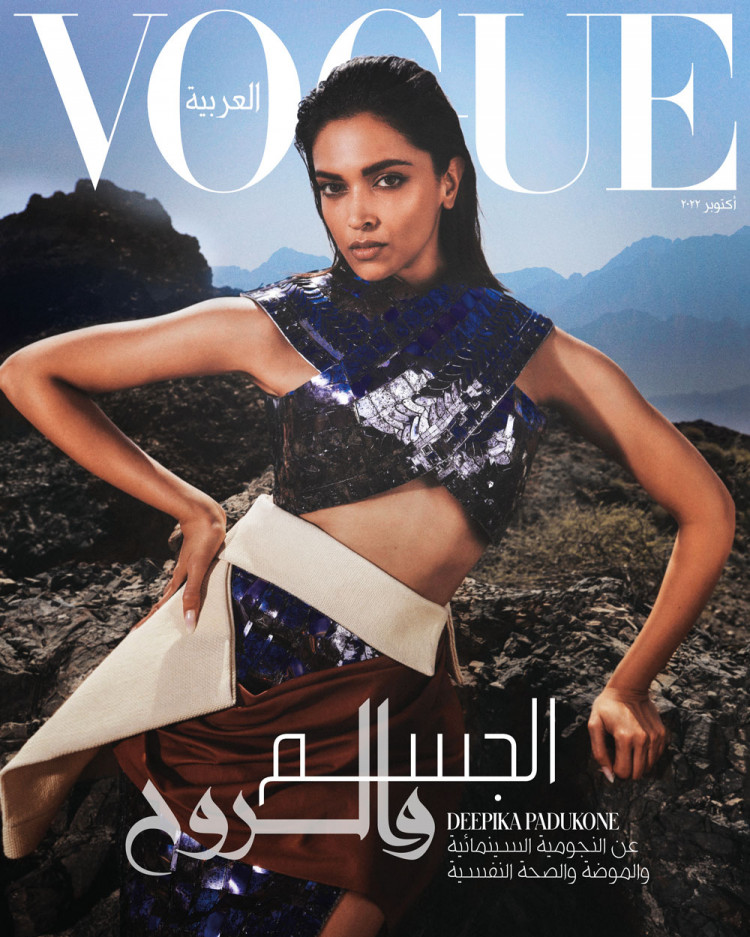 The October issue of Vogue Arabia starts the countdown to the Fifa World Cup in Qatar in style. And while not being a football-dedicated edition, the issue spans the gamut of mind, body, and soul, with mental health advocate and Bollywood fashion queen Deepika Padukone on the cover, shot against the backdrop of the Hatta mountains. It’s been 15 years since Padukone made her Bollywood debut, and she remains at the top of her game, with a huge movie release in January 2023, the upcoming Pathaan alongside Shah Rukh Khan and John Abraham. But in tandem with her spectacular success, Padukone adds her name to a list of celebrities who prioritize self-care and downtime as much as they do their career trajectory. “I think that my experience with mental illness has brought me to this space today. I prioritize my mind and my body over everything else. Did it take an illness to bring me to that level of awareness? Yes. But I guess that’s what it is. Sometimes you need to go through those experiences to really come out of something having learned something,” she shares with Vogue Arabia.

Finding a balance between personal and professional obligations is also key to our cover stars and power couple Spanish-Tunisian actress Hiba Abouk and Moroccan footballer Achraf Hakimi. With an impressive acting career that will soon see Abouk returning to the big screen with a 2023 film project, Hakimi’s big move to Paris Saint-Germain in 2021, two children, and the Fifa World Cup on the horizon, life has been moving at lightning speed for the duo. As the celebrity status and scrutiny mount in equal measure, the couple acknowledges that finding a work-life balance requires sacrifice, and looks to each other to weather the storms. A recent appearance on the Cannes red carpet that saw criticism over Abouk’s bold ensemble laid bare the misogyny stars often experience in the spotlight. “We don’t expect from a man the same things that we expect from a woman… it’s like that in the whole world, and in our Arab world too,” Abouk says. As a member of his national team, Hakimi will face a different kind of pressure on the field at the World Cup. “Here in Paris you play for the team of the city, but it’s not the same to play with the team of your country,” he says. “Millions and millions of people are going to support you because you play for them. It’s like you play for your grandfather and their grandfathers. You play for a lot of people, a lot of Moroccans.” This issue also shines light on a recent article that ignited global backlash for its racist criticism of Arab women’s bodies. When The Economist published an article in July of this year titled Why Women are Fatter Than Men in the Arab World, and used a picture of renowned Iraqi actress Enas Taleb without her knowledge or permission to illustrate the ideal of Arab beauty, it sparked outrage across the Middle East. Speaking exclusively to Vogue Arabia, Taleb shares that she feels her rights were “violated by the article, which humiliated Arab women and targeted Iraqi women in particular.” The actress says that the piece “is based on false prejudices that portray Arab women as gluttonous and undermines their awareness, education, and contributions. Arab women are among the most educated, and uphold the highest standards of beauty, reflective of one of the most influential and deep-rooted cultures in the world,” she says. In this edition, Vogue Arabia also meets six pioneering female Olympic athletes in the region who have blazed a trail with their exceptional sporting performances. With women in the Arab world not always having access to sports, these athletes have had various barriers to break in their quest to achieve success. But each has also stood on the Olympic podium with a medal around their neck – for these women, the ultimate reward for their lifetimes of commitment. In the fashion pages of the edition, Giambattista Valli reflects on his first decade in haute couture. With a landmark, 10-year-anniversary July show that unfurled in endless meters of tulle, silk faille, and duchesse ruffles, Valli’s Roman roots and celebration of excess endure on the runway today in an ever more contemporary context. Across the beauty pages, we explore how inclusive beauty has been extending to skincare, with regional launches targeting a spectrum of skin tones. This edition also meets with award-winning actress Isabelle Adjani, who continues to enchant both on stage and screen after over 50 roles to her name across a career that has spanned five decades. The French actress of Algerian and German descent offers a glimpse into her internal world, and discloses a sense of cultural displacement, revealing, “I have personally had to deal with the demands and traditions of three different cultures.”

Read Next: Editor’s Letter: Why Mind and Body Take Center Stage in Our October 2022 Issue