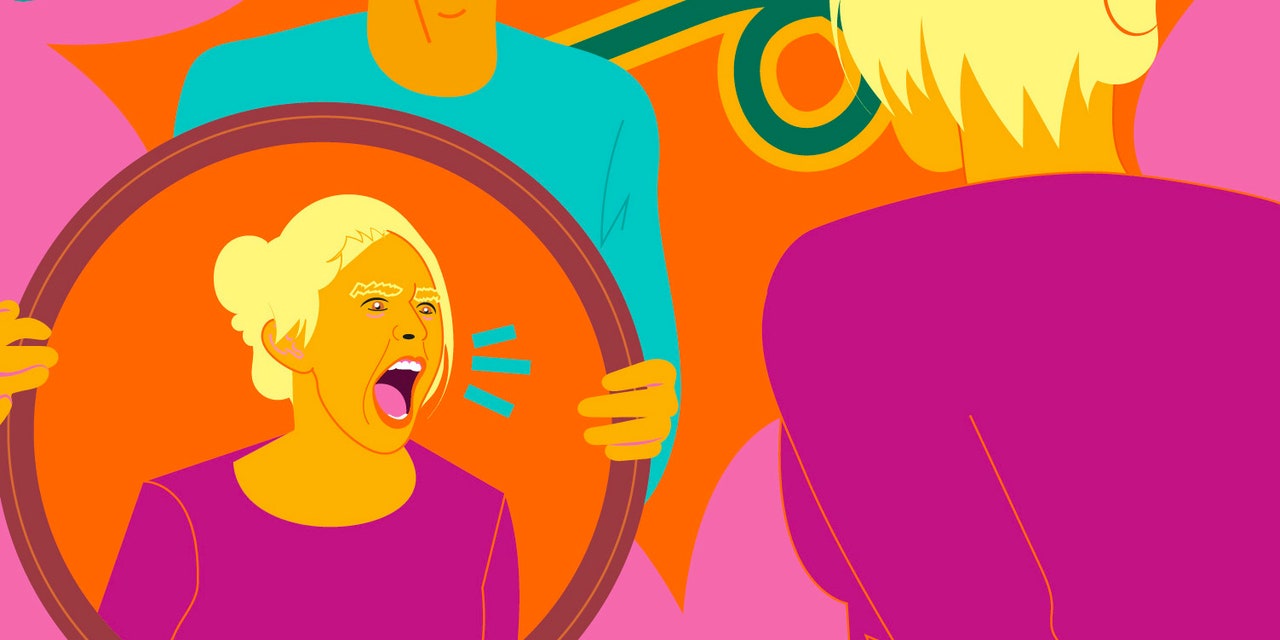 The good news, according to Dr. Bobby, is that situational rage is the least complicated type of misdirected anger to work on. “The first step is recognizing, I’m not myself right now; I’m going through something difficult that’s making me think and feel in angry ways,” she says. “Instead of following your feelings, it’s much more helpful to say to yourself, I’m not going to get tricked into believing this narrative is true.”

Take this scenario: You’re healing from a surgery and the pain is making you irritable to the extent that it’s clouding the lens you view life through: A slightly messy home looks hopelessly squalid to you. Whether or not you’re partly to blame for said disarray, you’re now furious with your partner for “never” cleaning up. Dr. Bobby recommends asking yourself, “How are my emotions coloring this story?” before you accuse your partner of chronic disrespect, which will likely leave them hurt, confused, and/or defensive.

In other words, rewriting your anger-provoking narrative may create some space between you and the hot feelings that seem to be whispering, “Slam the cabinet doors real loud and just go OFF!” in your ear.

Examine the patterns you learned from your family.

The behavior and beliefs you’ve learned from your family of origin can majorly inform how you handle most things, including anger. “When we’ve watched them either raging or bottling stuff up and then exploding, we unconsciously absorb that as how to be in the world—particularly in relationships,” Dr. Bobby says.

This can be uniquely complicated for those raised within a non-Western family culture, Siddiqi says. “A lot of first-, second-, and third-generation children grew up in families where anger wasn’t really talked about because it was a collectivist culture,” she explains. “It was never about their individual needs, but about what’ll keep the family unit happy.”

Ultimately, Siddiqi says, this can lead to “a lot of cognitive dissonance” and pent-up frustration that people never learned to express directly. “Some clients that I work with will be totally fine with their parents on the surface, but actually be really angry at them about something and then take it out on their partner,” she explains.

Siddiqi works with clients from a variety of cultural backgrounds to help them unlearn family-modeled patterns of destructive behavior through reflection and devising new “scripts,” meaning clearer language that lets them express their true emotions. “You’d be surprised at how many times people tell me, ‘I want to express my anger, but I don’t even know what to say,’” she says. “A lot of people don’t have the emotional education to know the difference between healthy and defensive words, or that a ‘you’ statement versus an ‘I’ statement can have a really big impact on the other person.”

For example, when you’re asking for that alone time after work, Siddiqi recommends saying something like, “When I come home, I need time by myself before I share about my day. I feel overwhelmed when you ask me a lot of questions at once. I’d like to talk in 15 minutes so I can decompress. Does that sound reasonable to you?”