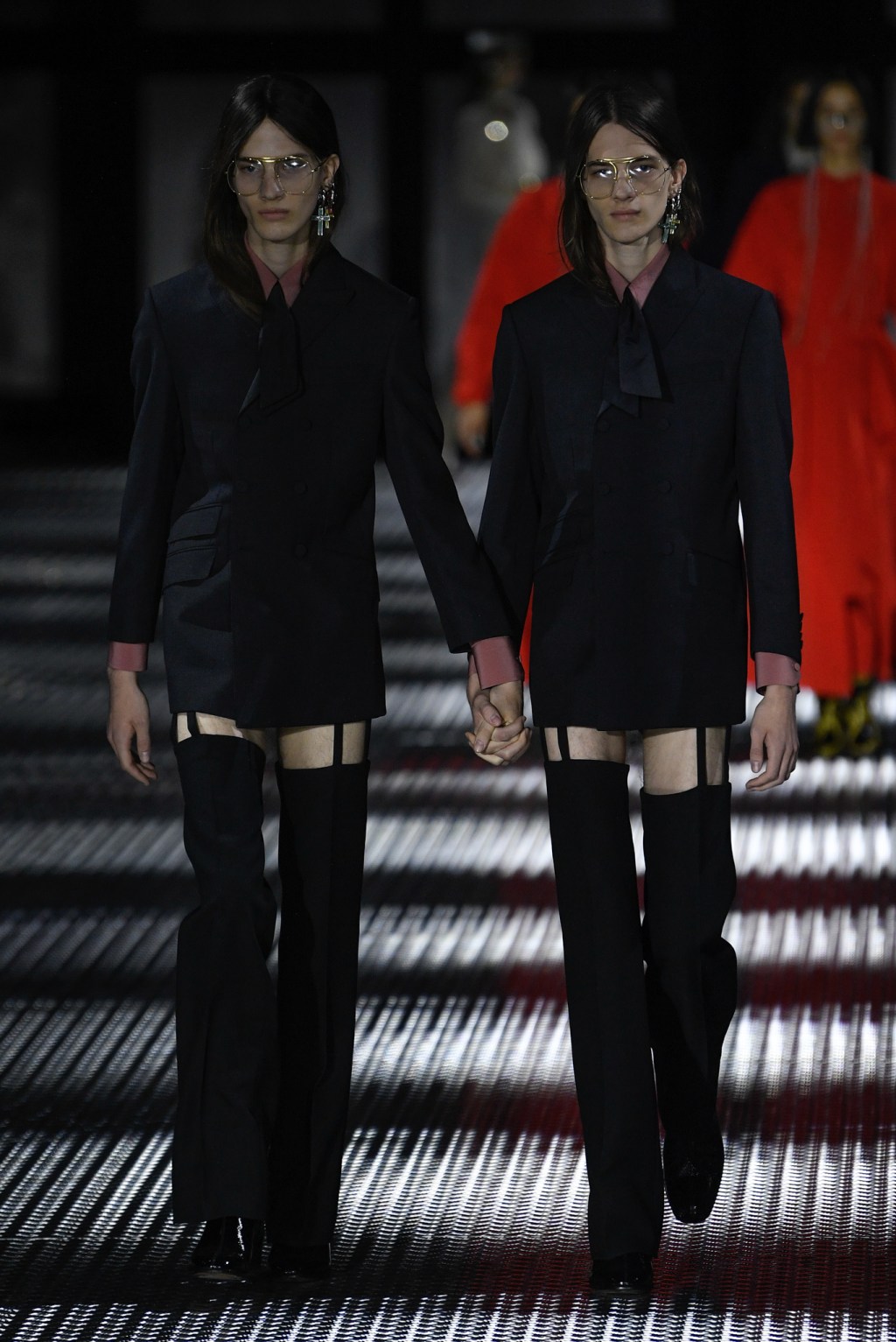 Who would think the simple act of coming together and holding hands would seem so radical? But at a time when there’s so much to lose, it was.

Alessandro Michele’s “Twinsburg” spring 2023 Gucci collection started with a straight runway show, before a center divider lifted to reveal the same one happening on the other side.

Then, 68 pairs of model look-alikes — all of them actual real-life twins — came together from opposite sides, joining hands for a final walk, making a poignant visual statement of solidarity two days before a deeply divided Italy goes to the polls in what is expected to result in a swing to the far right for the country, which could set back LGBTQ rights, among others.

It was a gorgeous, and deeply introspective, moment for Michele.

“I’m a boy who had two moms, because when I was born, the first seven years of life my mom had an identical twin. So I usually called them mom and mom,” the designer said in an interview, speaking of his late mother Eralda and late aunt Giuliana. “It was so beautiful my life with a double love,” he mused.

“So I grew up with the idea of the other one who is exactly like you but not you. It’s about humanity. It’s interesting that twins are the concrete vision of the other. It’s very attractive because it’s exactly like you. I did experience this from the outside in a deep way, constantly living with these two women who look the same, dress the same way, had the same hair, the same parfum, and it’s beautiful how in the bad moment they cared about each other. It’s very paradigmatic of our lives.…Especially now we need to care about the other that’s physically another person, but also the other you.”

Michele has been thinking about the idea for a while — since he twinned with Jared Leto at the 2022 Met Gala, and even before that when he sent models down his runway holding identical copies of their own heads. “Putting the head of another you in your arms, that means you are carrying yourself…”

“Right, because when you go to therapy, you meet your other, and you must love them, because they carry all the bad things you don’t want to show and suffer for you.”

Those inner gremlins, perhaps? They were on the runway, as in the actual stuffed animals and a motif on a dress and fuzzy shoes, in collaboration with Warner Bros., of course. (No word on whether Gucci will actually be selling Gremlins, or whether there will be Gucci Gremlins…)

Fashion has something to do with the other, too, Michele continued. “It’s about repetition but you pretend to be unique. That’s interesting. It means we are all the same and we are different.”

Clothes are also a tool to express identity, and Michele pointed to how they have done that historically for homosexuals, by sending several looks down the runway emblazoned with the word “Fuori!” which means “out” in English, and is also the name of Italy’s first monthly magazine dedicated to the fight for sexual liberation, founded in 1971.

“The symbol of the magazine was a bomb, and we are again with this bomb in our hands,” Michele said, acknowledging the freedoms hanging in the balance not only in Italy, but elsewhere in the world, in the Ukraine for independence, the U.S. for women’s rights and on and on.

On the subject of Italy’s election, he was urged by his PR not to comment. “I hope everyone will do the right thing for the world,” Michele said. “I’m putting this on the runway to remind us of the people we need to keep our freedom for.”

The collection was brilliant in how it grappled with individuality and unity, offering the tools (literally with silk wrench and bolt prints on a wispy skirt and coat) for crafting and declaring identity.

The suit was a strong proposition, with garter style pants suits that had finely tailored double-breasted blazers, midriff-baring suits with low-slung pants and thongs peeking out, and beautiful bourgeois lady suits — for all genders — cinched with a Nineties redux Gucci belt, and worn with mumsy quilted handbags.

There were nods to workwear — an oversize canvas cargo jacket trimmed in GGs, and matching baggy pants, and denim overalls covered in “Fuori!” stamps, and athleticwear, in the shell suits (worn with a crystal teddy bear handbag, natch). Folkwear, too, in the ’70s looking paisley quilted jackets and long skirts, floral tunics and wide-leg pants, like Michele’s mamas wore, perhaps.

He channeled a lot of love into eveningwear with global references, like a cheongsam apron top over a dazzling pink mirrored pencil skirt, a draped black velvet cape over a violet flamenco ruffle skirt and killer yellow snakeskin boots, and Hollywood siren silver lame cutout gowns.

“That’s really Gucci, you can see see things from the stage in the street, things from bourgeois, from an old lady on a man in a chic way, I try to give power to these beautiful things.” Which give power, he hopes, to the people.

He specifically called out the influence of underground gay culture on today’s mainstream fashion. “That’s the most visible way to say I need freedom,” Michele said of the erotica-tinged looks. “But at the end of the day, everyone needs freedom now.”