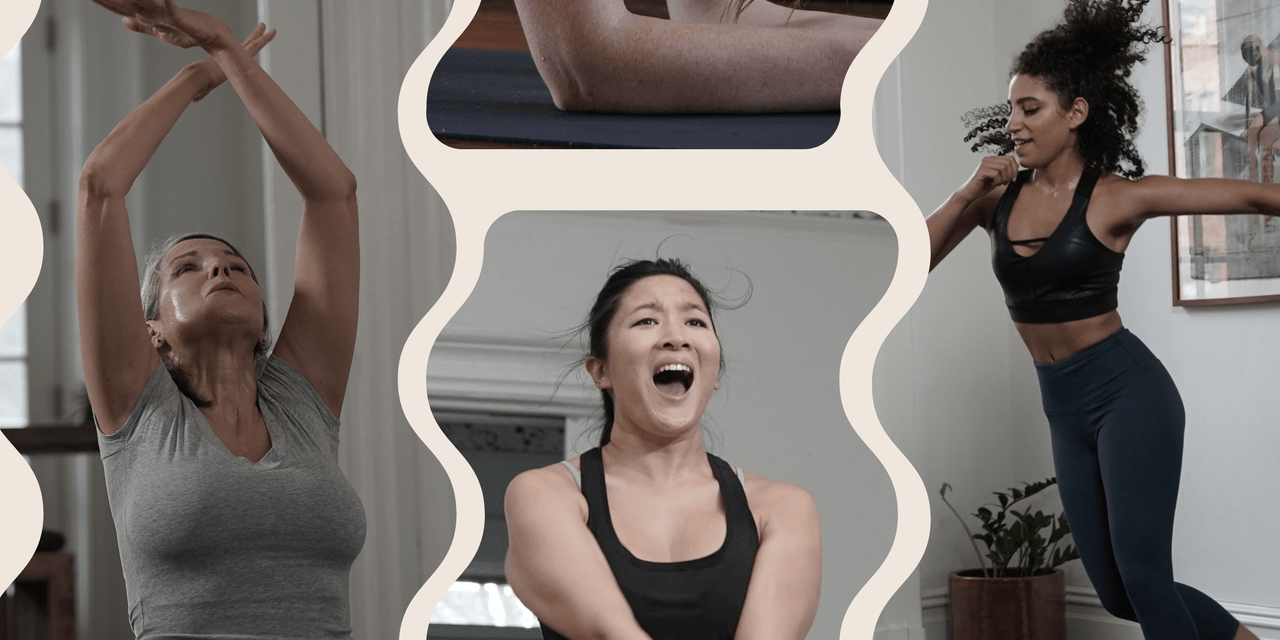 After my first encounter with The Class, I knew immediately it was not for me. The electric workout with a mind-body-spirit bend started over a decade ago, and it quickly gained a fiercely loyal following. By the time I first tried it, in 2017, it was no longer new, but it was still just as fashionable and popular. When I stepped into the chic Tribeca studio brimming with the scent of palo santo, I was hit with the distinct vibes of a fitness cult a la SoulCycle in 2009, and an army of petite, pretty twentysomethings sporting smooth ponies and pastel, abs-baring Lululemon sets.

The soundtrack was great and the workout itself was challenging, but I was turned off by the strange chorus of people “HAH”-ing (more on that later) or sobbing as they squatted, as well as the instructor’s bewildering suggestion as we slogged through the third long set of burpees that I just be with my burning quads and blaring thoughts (“FUCK THIS!”).

Fast forward to September 2021: My exercise and meditation routines were starting to feel stale and rote. I was also looking for ways to get out of my head and into my body. After a recent spell of anxiety and depression spirals, I’d realized how thinking thinking thinking only ever led me in tighter circles. I would feel so effing stuck in my own head. I needed to drop into my body and let my contracted mind take a break.

My sister, who had been doing The Class virtually and religiously (and rather loudly, in our tiny Brooklyn apartment) since the pandemic started, told me it was just the thing I was looking for. So I decided to give The Class one more go. And this time, I also knew immediately: This was now for me. The Class has since become a cornerstone of my self-care, mental wellbeing, and exercise routine—somewhere between therapy, meditation, and a good ol’ sweat session. So, what the hell is The Class, what changed for me, and why do I freaking love it today?

The Class is better understood as a whole-being practice than a physical workout.

Founded by former fashion exec Taryn Toomey in New York City in 2011, the Class combines an eclectic mix of elements—ritual, mindfulness, embodiment, repetitive and rhythmic movement, meditation, music, spiritual teachings, and vocalization. It blurs the line between workout and self-help, physical and energetic work, exercise science and woo-woo, sweat and spirit, routine and unpredictability, structure and fluidity, instruction and “you do you.”

A classic Class, as led by Toomey or a few of my other favorite instructors, begins with grounding: eyes closed, hands on your torso, and a big stretch. The instructor drops in a nugget—a reflection, a question, an intention—on a topic like self-care or the ego, to inspire how you work with whatever arises over the next hour. The meat and potatoes of the class is a series of strength and cardio moves, each done for the length of a song: high-impact, full-body classics (squats, burpees, skaters, jumping jacks) and barre- and Pilates-inspired pulses or isometric holds targeting your butt or core. Sprinkled in are down dogs and child’s poses, modifications, reminders to return to your breath, bits of food for thought on that original theme, and, most eccentrically, cues to release sound: a forceful, verbal “HAH!” on the outbreath at the top of your burpee or an “Arggggh!” mid-mountain climber. The Class closes with heart-clearing, or heart-opening, where participants sit kneeling and flap their arms in front of and behind your chest, elbows bent.

Between 2017 and now, I’ve changed in ways that have made me more open to what can unfold during a Class, if you allow it.

A few years ago, I established a mindfulness meditation practice, cultivating a capacity and willingness to be present with my thoughts and emotions; study their patterns. And then at some point, I got kind of bored. My formal sitting routine started to feel more rote than supportive, the stillness more oppressive than grounding; the neutrality of observing my thoughts, clinical and intellectual. I was craving a livelier, juicier mindfulness practice when I re-encountered the Class.