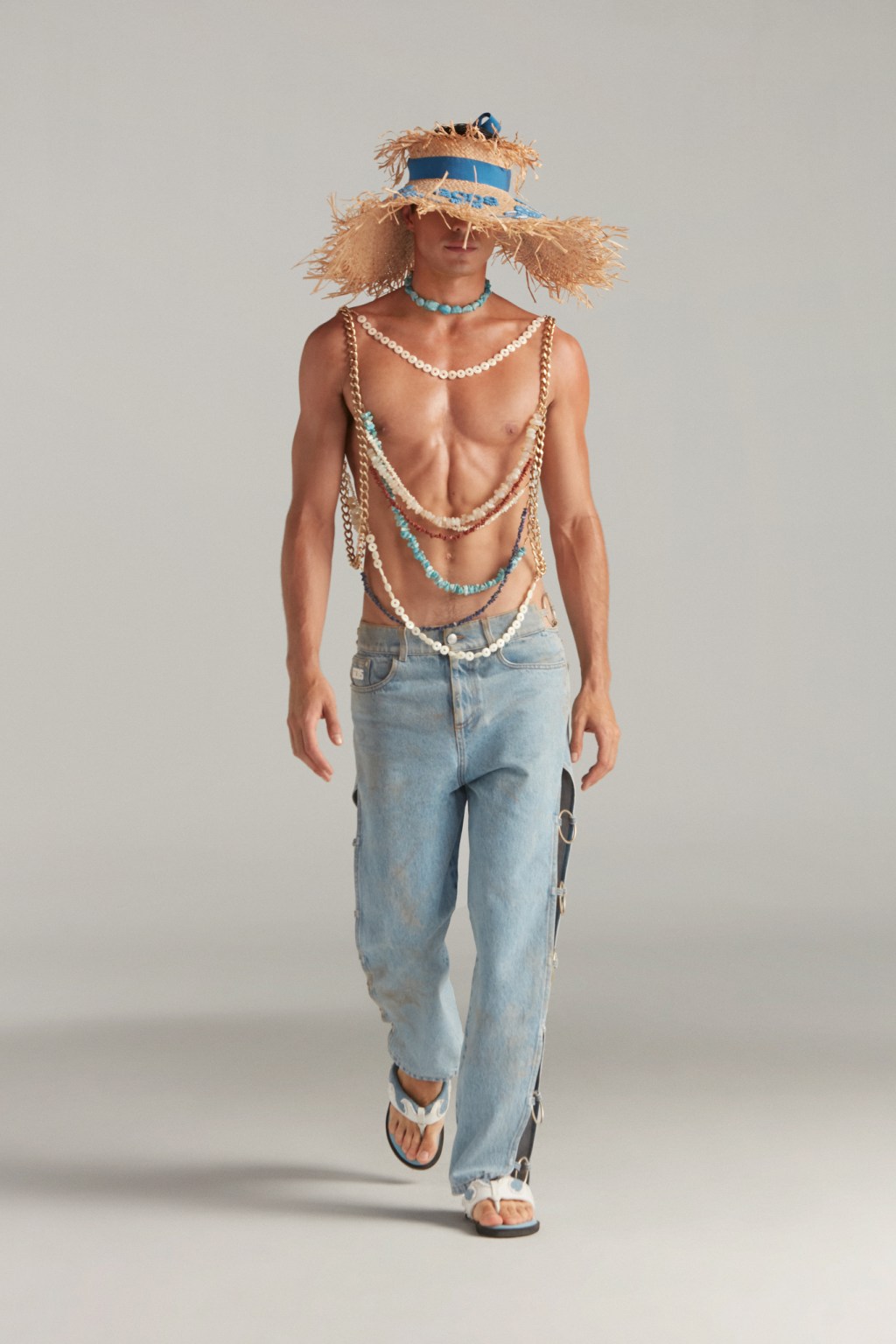 Giuliano Calza’s beachy bright collection — full of raffia, jangly jewelry and hand crochet — was a salute to summer and a post-lockdown life. This unisex collection had it all — soft and sun-bleached denim, manga comic references, slinky eveningwear with hidden logos and a sustainability angle, too.

It all hung together in a surreal film written and directed by Calza that took viewers to the desert, and to an underwater jellyfish world. During a walk-through of this upbeat collection, Calza, whose title is creative director, said he wanted it to be “comfy, easy — and precious, too. I designed it knowing it would be the first collection to hit the beach post-pandemic.”

There was lots of flashiness and fun in the form of a tailored jacket paved with pink crystals, courtesy of the Czech company Preciosa, and a long, screaming yellow sunhat-slash-cape with a melting popsicle design, a nod to the late Franco Moschino.

Little crochet pirate heads were stitched together to form a minidress, a long fringed skirt and a tank top, all of them studded with fat faux emeralds. The designs were inspired by a characters in “One Piece,” the Japanese animated series produced by Toei Animation.

Calza, who sold a majority stake in GCDS earlier this year to the Made in Italy Fund, which looks to promote small and medium-sized brands, is also taking an eco-turn, introducing a new “green label” for spring, filled with clothing and accessories made with sustainable or upcycled denim and jersey.

There were also chunky clogs that looked as if they were made of rubber, but instead were fashioned from recycled and compostable materials. The designer will be showcasing the new green label at Selfridges in the coming months.

Despite all the flash and green flourish, there was one thing missing here — the in-your-face logo. Calza’s a pro at reading the industry tea leaves, and believes now is not the time for bold statements.

Instead, he sneaked the GCDS letters into the chunky chains on hobo bags, traced them lightly onto a long, black sequin dress and the buttons of a shirt — a cool act of subversion.