Shields and her business partner Jeff Lee, formerly the chief operating officer of A-Rod Corp who helped launch JLo Beauty, are cofounders of DIBS Beauty, a makeup company whose name is an acronym for Desert Island Beauty Status. The two met via an introduction from the cofounders of Tula, with whom Shields collaborated on a top-selling eye balm that launched last year.

DIBS raised $2.6 million in an initial round of funding from L Catterton partners Michael Farello and Jonathan Owsley, who invested individually; Tula cofounders Dan Reich and Ken Landis; and fellow influencers. (L Catterton previously invested in Tula.) The brand will launch on Sept. 15 with highlighters and blush-and-bronzer sticks, priced at $32 each. The direct-to-consumer launch coincides with the three-year anniversary of the death of Shields’ father, who was an entrepreneur in the computer industry.

“I am a single mom, and I have always had this massive passion for beauty,” Shields, who also has a jewelry company, told WWD via Zoom from her home in Austin, Texas. “I grew up in Austin, and I was the only Lebanese woman in my friend group. All of my friends were blond hair, blue-eyed. I spent a lot of my formative years not understanding that being different was actually an advantage. Over time I developed this self-love and love for helping other people enhance their own beauty and feel good in their own skin.” 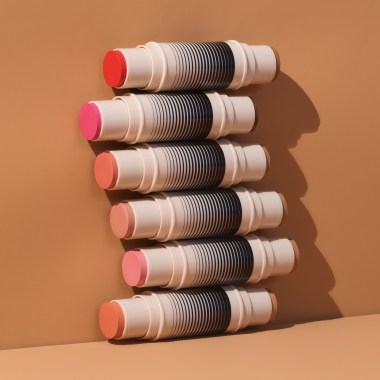 Shields’ first product, Status Stick, is a thick highlighter meant for application to the face and body. There are also Duo Sticks, which contain cream blush and bronzer on either end.

“I was sick of using products that sprayed everywhere and exploded in my bag,” Shields explained. “I wanted to create a product that gave me beautiful, enhanced skin, but wasn’t messy, hard to use [or] sticky.”

DIBS’ hero ingredient is mango butter derived from mangoes sourced from India. The mangoes are brought to Denmark via a “seven-step proprietary process,” Lee said.

“We commissioned all our formulas, and we create the tools to make our sticks and our makeup when we have to,” Lee said. “We spent about a year devising the tool that will perfectly level the duo so it could be blend-able.”

Lee and Shields declined to offer sales projections, but industry sources estimate DIBS will bring in between $5 million and $10 million in first-year retail sales.

Headquartered in Austin, DIBS plans to raise brand awareness by working with local and regional influencers throughout the middle of America — a not-so-common strategy in a beauty industry dominated by brands based on either coast.

“Every brand is born in New York and L.A., and then rose out from the ivory towers of Melrose and SoHo,” Lee said. “We’re a brand that was founded in Austin by a woman who lives in Austin. People who live in Texas see her as one of them. We’re going to introduce [the brand] to them in-person on the local level, not necessarily [through] mega-influencers. We want to get to you through people you know and the people who would look up to someone like Courtney.”

Sephora at Kohl’s: The Big Reveal