I remember buying the 1969 June edition of Road & Track off the newsstand, back when such places were the only source of information for young car enthusiasts. The issue compared four luxury GTs: a Porsche 911T, a Jaguar E-Type, a Chevrolet Corvette and a Mercedes-Benz 280 SL. At the time, these were the cars to beat, each with a distinct look, personality and performance profile. As my car-know-it-all buddies and I poured over the magazine during ninth-grade homeroom, we expressed definite opinions as to the merits of each contender.

I liked the Porsche, most wanted the Corvette, the Jag got a vote or two and the Mercedes . . . well, it didn’t register any interest in kids enamored of sporty cars with long hoods and swoopy fastbacks. Come to think of it, the Road & Track editors were a bit bewildered too. “Generalizing about its qualities,” they said of the 280 SL, “it was the most comfortable, offered the least performance, had the busiest engine and the largest price tag.” 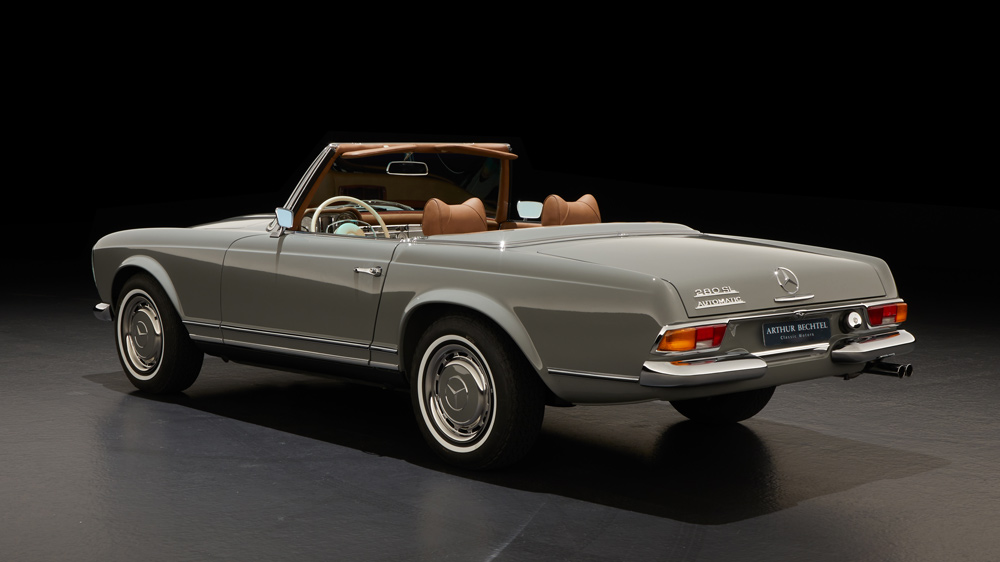 In the intervening fifty-plus years since that review, those observations mostly ring true, but in an age where an old car’s performance can’t remotely compare to the even the cheapest modern grocery getter, such things as zero-to-60 mph times are mostly irrelevant. And so the SL becomes a very interesting car, indeed.

Built like the proverbial German pillbox, the satisfaction of just closing its doors is sufficient reason to own the vehicle. The 280 SL was the last iteration of the model commonly called the “Pagoda,” so named for the concave roof of the removable hardtop that, when stored in the owner’s garage, allowed the car to become a handsome convertible. 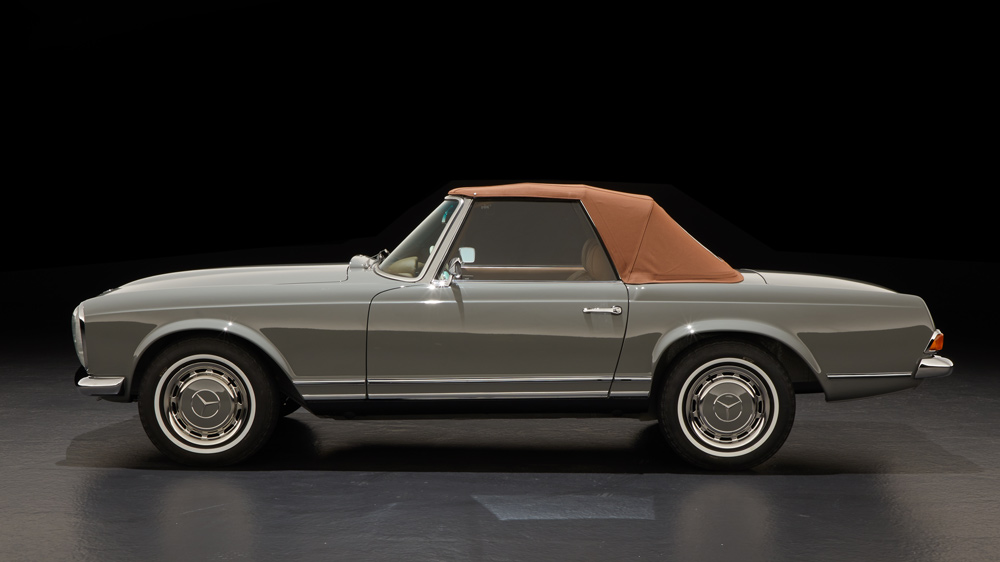 The fabric top can be stowed and replaced with the fitted aluminum hardtop roof, from which the nickname “Pagoda” is derived.

The Pagoda was introduced in 1963 after the 300 SL and 190 SL had ceased production. It started life as the 230 SL, which was made through 1967, becoming the 250 SL through 1968. That car’s 2.5-liter displacement was accompanied by a more robust engine, using a seven-bearing crankshaft instead of one with only four main bearings. The 280 SL was built from 1968, with almost 24,000 examples made through 1971, more than half coming to the US. The 2.8-liter, SOHC inline-six had mechanical fuel injection and developed 180 bhp at 5,700 rpm. A four-speed manual or four-speed automatic transmission were available. 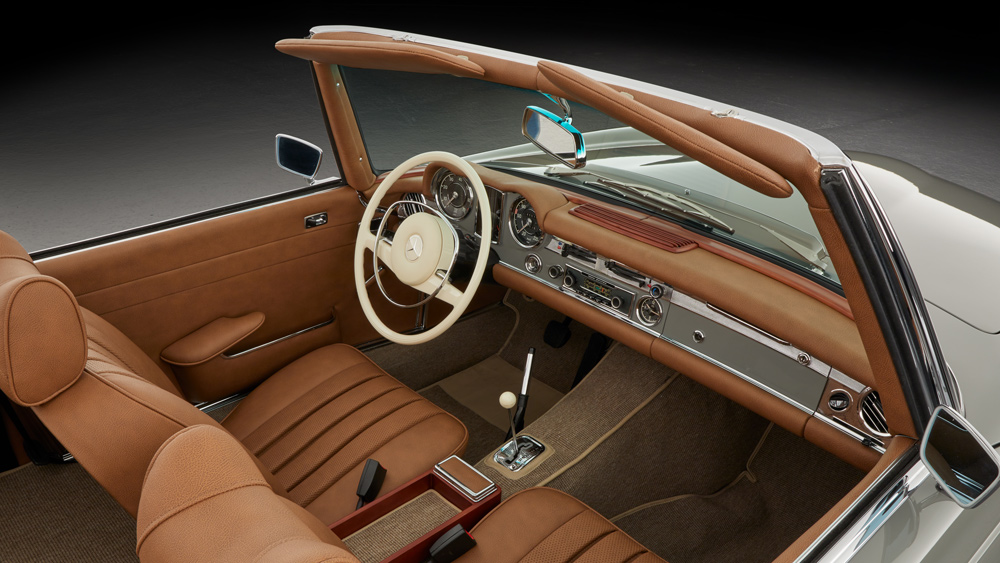 The Cognac leather interior and square-weave carpeting are luxurious yet understated.

Properly restoring a 280 SL can be an expensive proposition, as the cars, while simple in appearance, are fastidiously made and require equally fastidious attention to detail when being rebuilt from the ground up. But there’s a demand, as it’s a model which, thanks to its classic good looks, comfort, friendly driving manners and ease of ownership, is an international favorite among collectors of 1960s-era GTs and sports cars.

Based in Böblingen, Germany, Arthur Bechtel Classic Motors (the outfit that created the tribute car to the famed “Red Pig” 300 SEL racer we’ve reported on previously) offers a restoration program specifically for the 280 SL. And the 1969 example featured here is proof of the restoration house’s exemplary work. 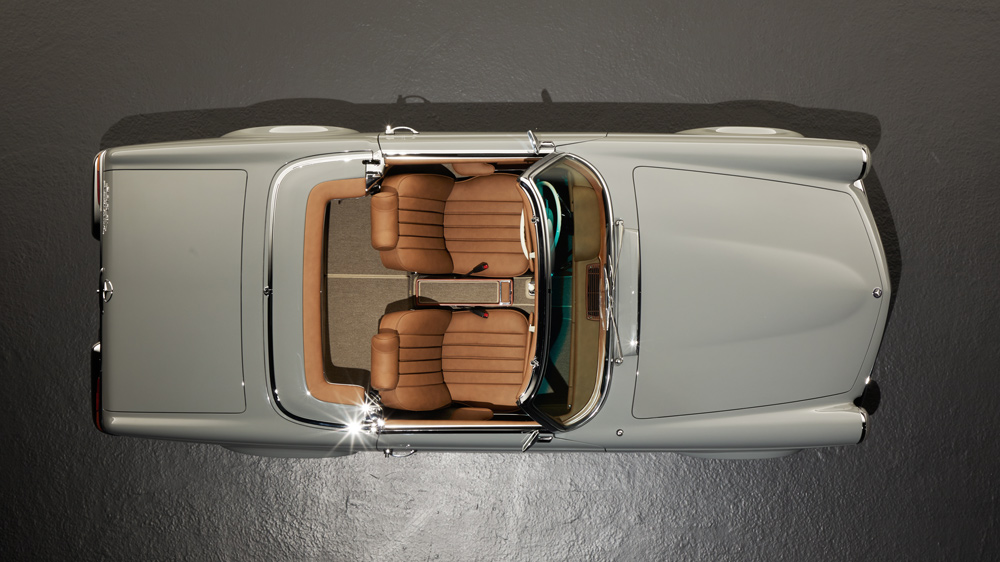 From above, the 280 SL is as simple, geometric and masterfully designed as a piece of Bauhaus architecture.

A nifty configurator on the Bechtel website lets prospective owners build their dream SL, selecting from a palette of original Mercedes-Benz colors. It’s no secret that Mercedes offered some of the tastiest paint schemes of the era, as sophisticated and rich-looking as the vehicles themselves. A choice of interiors and accessories can be combined to create a one-of-one 280 SL. Prices for a complete car start at $285,000, with commissions requiring six to eight months until fruition and three to four weeks for shipping Stateside.