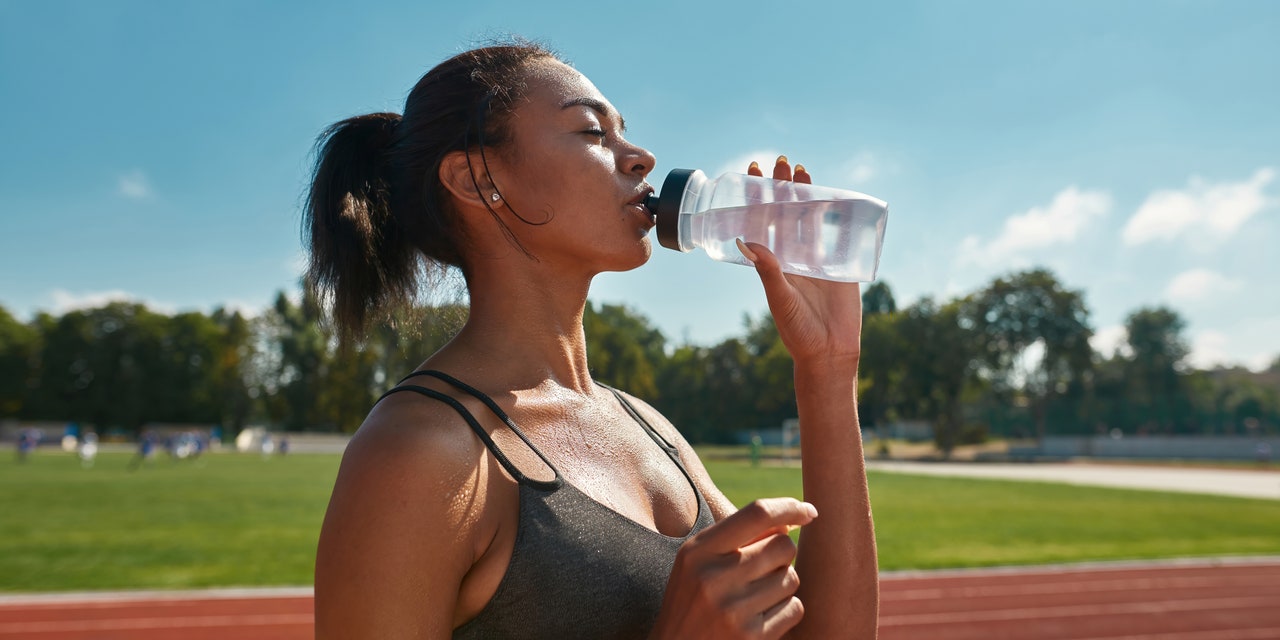 “General nutrition recommendations are to take anywhere from 300 to 600 milligrams of sodium per hour that we’re exercising,” Samuel says. “Some people are saltier sweaters—like if your sweat really burns your eyes, if you have a lot of white on your clothes after exercising, or if you can just feel a lot of salt crystals on your skin. Those people might need upwards of 1,200 milligrams of sodium per hour just to replace what they’re losing.”

Remember, sodium is the most important electrolyte for replacement in these cases. So focus on that in your electrolyte drinks or packets—the other electrolytes they provide should be enough to replace the electrolytes you lose in lesser amounts.

5. Re-fuel with a hydrating smoothie.

Another quick way to re-hydrate post-workout is with a smoothie. Smoothies are particularly a good choice if you exercise for less than an hour—meaning replacing larger amounts of sodium (like you’d need with an electrolyte packet or drink) likely won’t be as much of a concern. They’re also great for fueling up on other nutrients your body needs post-workout, such as protein and fat, especially for those who might not have a big appetite after exercise.

To make the most of your smoothie, add foods that are naturally high in electrolytes, like watermelon, banana, and dates, Samuel says. You can also incorporate some leafy greens and coconut water, which are excellent sources of potassium.

“Putting fruit into a smoothie, like bananas or dates, that are high in potassium and adding some sea salt can help you rehydrate,” she says.

If you have trouble remembering to take frequent sips after your workout, Pryor suggests eating foods high in water content, such as cucumbers, peppers, broccoli, lettuce, and watermelon, to help replenish your fluids. Zucchini, cauliflower, strawberries, and celery are also very hydrating vegetables and fruits to munch on, according to the Cleveland Clinic.

Add these foods to your salads, smoothies, or just snack on them throughout the day to increase your water and mineral intake.

“Try putting some sea salt on your watermelon. That would help with replacing sodium and potassium because watermelon naturally has a lot of potassium,” Samuel says.

Eating snack foods that are a little higher in sodium can help your body retain water. Consider eating some pretzels, salted nuts, cheese and crackers, and beef jerky, while also drinking water, Samuel says. You can also enjoy saltier meals, like sushi with soy sauce or a tuna sandwich.

“Most people can replace electrolytes lost in sweat simply by eating a wide variety of healthy foods,” says Pryor.